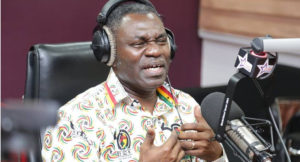 Member of Parliament for Akim Oda, William Agyepong Quaittoo has assured residents of his commitment to collaborate with the Birem Central Municipal Assembly and other relevant state institutions to help reconstruct a deteriorated narrow bridge over a stream close to the Jubilee hospital in the town.

The MP gave the hint in an interview with www.ghanamps.com following another accident that occurred on the narrow bridge last Saturday June 16, 2018, where a truck loaded with sand skidded into the drain.

The heavy loaded double axel tipper truck broke the shoulder of the bridge and fell into the drain.

Some of the residents who spoke to ghanamps.com claimed that officials from the local assembly were at the scene to take photos of the incidence but no action has been taken to remedy the situation as at the time of filling this report.

According to the residents, they have on several occasions appealed to the local authorities to construct a more befitting bridge across the stream to curb avoidable accidents and provide them comfort but to no avail.

The residents explained that the road was further rendered narrow and more dangerous about two weeks ago when some huge concrete slaps were placed on one side of the road on the bridge.

The concrete slaps which have reduced the entire stretch of the road into a one way lane are supposed to prevent vehicles from falling into a hole that has developed on the bridge due to its deteriorated nature.

Residents of Akyem Oda which is the Municipal capital of the Birem Central Municipality have also bemoaned the general poor state of roads within the municipality and have therefore urged local authorities and the central government to fix them in order to improve transportation in the area.