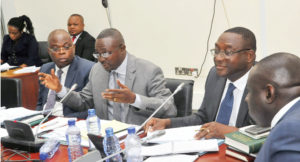 As Ghana prepares for a referendum on December 17, 2019, to pave way for the election of Metropolitan, Municipal and District Chief Executives (MMDCEs), Majority Chief Whip, Kwesi Amenyaw Cheremeh allays fears that election of MMDCEs would not slow development at the local level.

Accord to him, it would rather fast track development in the districts and in addition introduce competition.

“You can have two adjourning districts with two chief executives, one being controlled by the New Patriotic Party (NPP) and the other by the National Democratic Congress (NDC), where residents would make reference to development going on in each districts”.

Again, the principle of accountability would work, not a case where today the sector Minister calls chief executives to order.

“If a President is visiting a district, the chief executive had to provide budget to host the president, meanwhile he or she cannot even clear refuse in the district, because the president appointed him. He or she has to look for the money to host the visiting president instead of addressing the local needs of the people”, he lamented.

He further pointed out that he started the whole campaign of electing MMDCEs as far back as 2002 at a roundtable discussion but many people did not agree with him, “but it has caught up with us today”.

He made this remarks at the launch of a sensitization programme by the National Catholic Secretariat ahead of the December referendum.