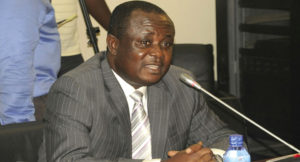 First Deputy Speaker, Joseph Osei Owusu has directed that Members of Parliament seek leave of absence and ensure its confirmation before embarking on any trip.

He referred the House to Order 15 (1and2) “Every Member shall attend the service of the House unless a leave of absence has been given him by Mr. Speaker. Leave of absence may be given by Mr. Speaker to any Member who shows sufficient cause justifying his absence or who in a way on official or Parliamentary duties”, he said.

This issue came up on the floor of the House when MP for Effutu wanted the direction of the Speaker as to why parliamentarians on official duty are sometimes marked absent in the votes and proceedings of the House.

Mr. Alexander Afenyo Makin agreed with the Speaker on the grounds that the fact that an MP puts in application for leave of absence should not be taken for granted that it has been approved.

MPs from both sides of the House have had course to complain of them being marked absent, despite the fact that some of them would be on official assignment within the country with various committee work.

Meanwhile some MPs have suggested that there should be a clocking machine in the chamber for MPs to clock in instead of the normal way of going to the mails room to write their names.