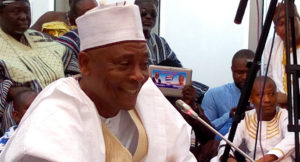 According to the Minister so far four hundred and seventy-nine (479) Zongos in five regions have been visited; Brong Ahafo, Eastern, Central, Upper West and East Regions and Nangodi Zongo Community.

He noted that discussions were held with opinion leaders in the Upper East Region, as it emerged the three priority developmental needs of the people were, boreholes, Neem Oil extraction factory and English and Arabic Basic school.

The Ministry would asses these needs and determine with the involvement of the Nangodi Zongo Community, which of the projects would have the highest impact and therefore prioritize for implementation in the 2018 to 2019 fiscal year, he said.

He indicated that the second phase of need assessment would cover Greater Accra, Ashanti Western, Volta and the Northern Regions.

He added that with the Board in place, work is expected to proceed in earnest in providing solutions to the myriad of challenges facing the Zongo Communities.

Dr. Mark Kurt Nawaane Member of Parliament for Nabdam, wanted to know projects to be undertaken in Nangodi Zongo in the Nabdam District for the year 2018.