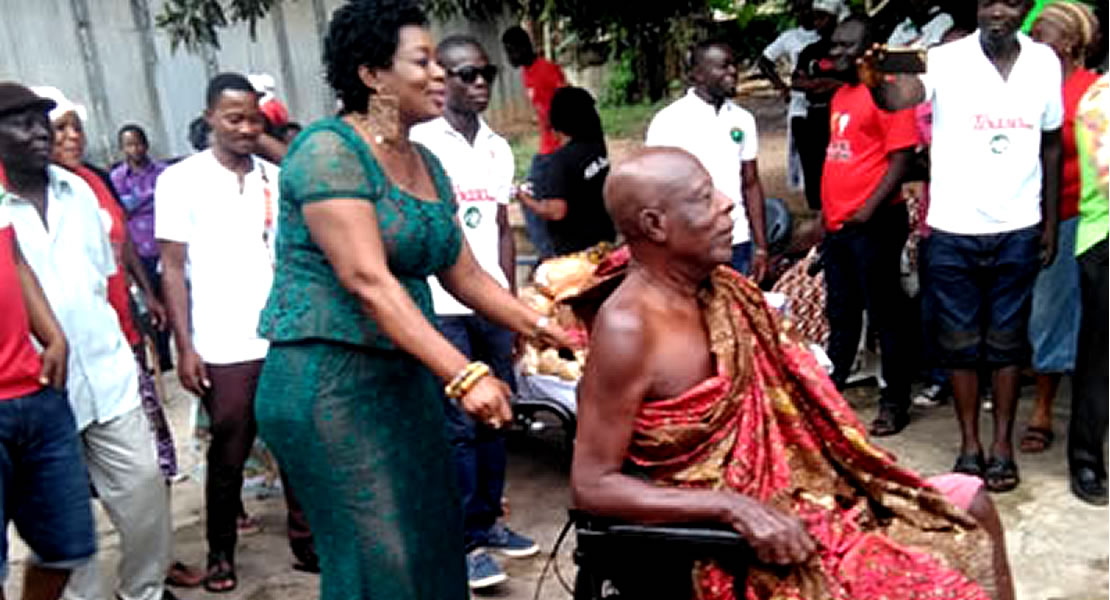 July 21, 2017
Member of Parliament for Agona East, Queenstar Pokua Sawyerr has extended a helping hand to veteran actor AsunabaKwakuDarko alias Super OD who has been home ridden for over 3 years.

Items presented to the octogenarian actor includes an electric wheel chair, a bag of rice, cooking oil, creates of egg, packs of toilet roll, and a crate of milk. The rest of the items are boxes of lipton tea, sugar, a bucket of washing powder, loaves of bread and GHC 1000.00.

The items especially the wheel chair the MP said will help in the upkeep of the legend who now has difficulty in movement due to old age though not sick.
Mrs Sawyer commended Super OD for his good works which has been an inspiration to her and many Ghanaians.

She urged Ghanaians to honour our heroes and heroines whiles they are alive instead of waiting to read nice words after their death.The MP prayed for good health and long life for the veteran actor.

The Agona East lawmaker said she was touched by the sad story of the super Star when watched his unfortunate predicament on TV3 where he is unable to walk without an aid.

She disclosed that the donation was out of her love for the vulnerable in society, stating, ” he who much is given, much is expected.”She assured the veteran of a regular visit with support.

Super OD who could not hide his ecstasy thanked the MP for her kind gesture and advised the youth to care for their parents and do their best and not depend on anybody for their survival.

Supper-OD, 82, has featured in many local series including OsafoDadzi on GTV.The  hilarious Actor , started his  career  from the 1970s to the 90’s,  and was very popular for his roles in one of the local series, known as Akan Drama on Ghana Television (GTV).

Until his retirement, Super-OD acted with his rib cracking jokes that gained himmuch popularity both local and international.