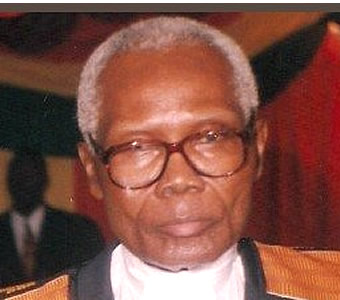 Justice D.F. Annan was born on the 7th of November, 1928 in Accra. He was educated at Accra Academy from 1939 to 1945. He proceeded to the University of Hull in the United Kingdom to do a course in Law and eventually graduated with LLB (Honours) Degree in 1956.

He entered the Inns of Courts in London and he was called to the Bar at the Middle Temple in 1958. Soon after he had completed his studies in England, as patriotic citizens of Ghana, he proceeded home to serve his nation and joined the civil services as Assistant State Attorney in the Attorney-General’s Department.

He also served the country as Stool Lands Boundaries Settlement Commissioner from 1974 to 1976. He was a member of the Legal Class Appointments Board where he served from 1974 to 1979. He was the Chairman of the Press Freedom and Complaints Committee of the erstwhile Ghana Press Commission in 1980.

On a number of occasions, Mr. Justice Annan represented the Chairman of the P.N.D.C. at international conferences, including conferences of the United Nations Organization, Organization of African Unity, ECOWAS, and the Non-Aligned Movement.

Justice Annan was not only a jurist but he also took interest in sports. He was the Chairman of the Ghana Boxing Association (GBA) and also the President of the Ghana National Olympics Committee (GOC) from 1983 to 1985.

Mr. Justice Annan has travelled widely around the world serving his nation on various delegations of the following important conferences: Commonwealth Heads of Government Meeting in Kuala Lumpur, Malaysia, in 1989; headed Ghana’s delegation to the United Nations General Assembly in 1984 as well as in 1985; the Non-Aligned Movement Summit in Harare in 1986 and Organization of African Unity (OAU), Addis Ababa, in 1984 as well as in 1985; the Economic Community of West African States (ECOWAS) meeting in Lome in 1984; the World Economic Forum in Switzerland in 1990; the 14th Commonwealth Speakers Conference in Nicosia, Cyprus in 1996.

He was married to Mrs. Regina Annan with four children. His hobbies are gardening and general politics.