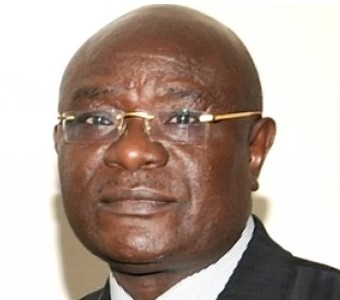 Born on the 3rd of January, 1957, Rt. Hon. Edward Korbly Doe Adjaho had his Secondary and sixth form education at the Accra Academy between 1972 and 1979, where he obtained both his Ordinary and Advanced Level Certificates.

He attended the University of Ghana where he studied law, Economics and Sociology. He majored in law and was awarded LLB (Hons) Degree. He proceeded to the Ghana School of Law for his Professional law program and was subsequently called to the Ghana Bar.

Rt. Hon. Adjaho started his legal career at the Attorney-General’s Department as a State Attorney.Between 1991 and 1992, he served as a member of the Consultative Assembly which drafted Ghana’s 1992 constitution.

As a Member of Parliament, Rt. Hon. Adjaho occupied the following positions;

He also chaired a number of Committees including the Appointment Committee, the Privileges Committee, Roads and Highways as well as the Works and Housing Committees. He is currently the Chairperson of the Standing Orders Committee and the Committee of Selection.

He has also served on a number of Commissions and Public Boards including the National Media Commission and the Law Reforms Commission. He was the Chairperson of the National Health Insurance Authority and a member of the Permanent Negotiation Team set up to negotiate a peaceful settlement of the ethnic conflict that erupted in Northern Ghana in 1994. He now chairs the Parliamentary Service Board.

The Rt. Hon. Speaker was one of the Legal Experts and Parliamentarians who worked on the Consultant’s Report on the Constitutive Act of the African Union and the Protocol to the Treaty establishing the Pan-African Parliament.

Rt. Hon. Adjaho worked with the International Republican Institute of the United States to review the Constitution of political parties in Uganda prior to that Country’s return to constitutional rule, as well as train members of the Opposition Party in Sudan before the formation of the Government of National Unity.

In 2013, he served as a key Resource Person during the post-election seminar and orientation for Members of the Kenyan National Assembly. Rt. Hon Edward Doe Adjaho is a member of two (2) professional bodies, namely, the Ghana Bar Association and the International Bar Association.

His election to the high office of the Speaker of Parliament was after 20 years of solid and dedicated, uninterrupted parliamentary career during which he gained considerable experience and exposure in parliamentary practice, Procedure And Administration, both locally in the Ghanaian Parliament and internationally from several countries including the United Kingdom, the United States of America, Australia and Canada.

He serves Ghana’s Parliament with distinction and dignity, integrity and intellect using his legal mind, exhibiting quick thinking, excellent legal training, paying attention to the Letter Of The Law and showing commitment to public service to make objective decisions that protect the interest of the state as a true public servant.

Always first in his mind is the devotion to upholding the Constitution of the Republic of Ghana and determination to respect the institution of Parliament and through these he has become a careful steward of the rules of the House, a source of wise counsel and a positive reference for responsible parliamentary leadership.  For these attributes he has received several recognitions and was recently awarded Doctor of Law Honoris Causa, LLD, by the University of Professional Studies Accra (UPSA) in 2013.